A comprehensive map of Night Network public transport in Greater Melbourne and Geelong. Services operate from 1am to 6am on Fridays, Saturdays and selected public holidays.

Download a PDF copy of the Night Network map here. 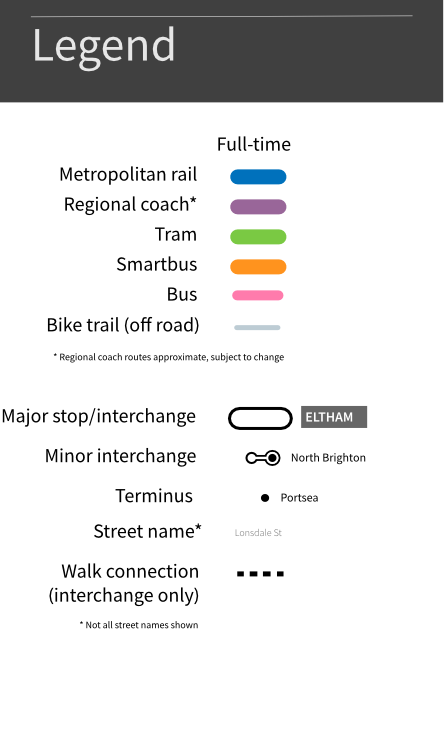 This is a comprehensive map showing all Night Network public transport routes in Greater Melbourne and Geelong.

It is a version of the main transport map specifically designed to show the Night Network.

You can view the regular network map here.

While PTV has published its own Night Network maps, there is no single map showing the entire network of trains, trams and buses.

There are also several issues with the PTV Night Network map. These include:

Despite this, the new PTV Night Network map is a big improvement on previous ones. It is also one of the few recent maps it has published showing multiple modes across the entire metropolitan area.

This took me a surprisingly long time. Trains and trams were fairly straightforward, but mapping bus routes was often difficult.

Contrary to the regular map, what took me the most time for this one was figuring out exactly where each individual bus route went.

Yes! While the map is copyright, it is freely available for anyone to use 'as is'.

I work with a combination of Affinity Designer and QGIS. Early in my design process of the regular map, I also use old-fashioned whiteboards, paper and pencils.

The route of a bus/tram/train/bike path doesn't actually look like that. Is it a mistake?