A comprehensive public transport map for Greater Melbourne and Geelong. 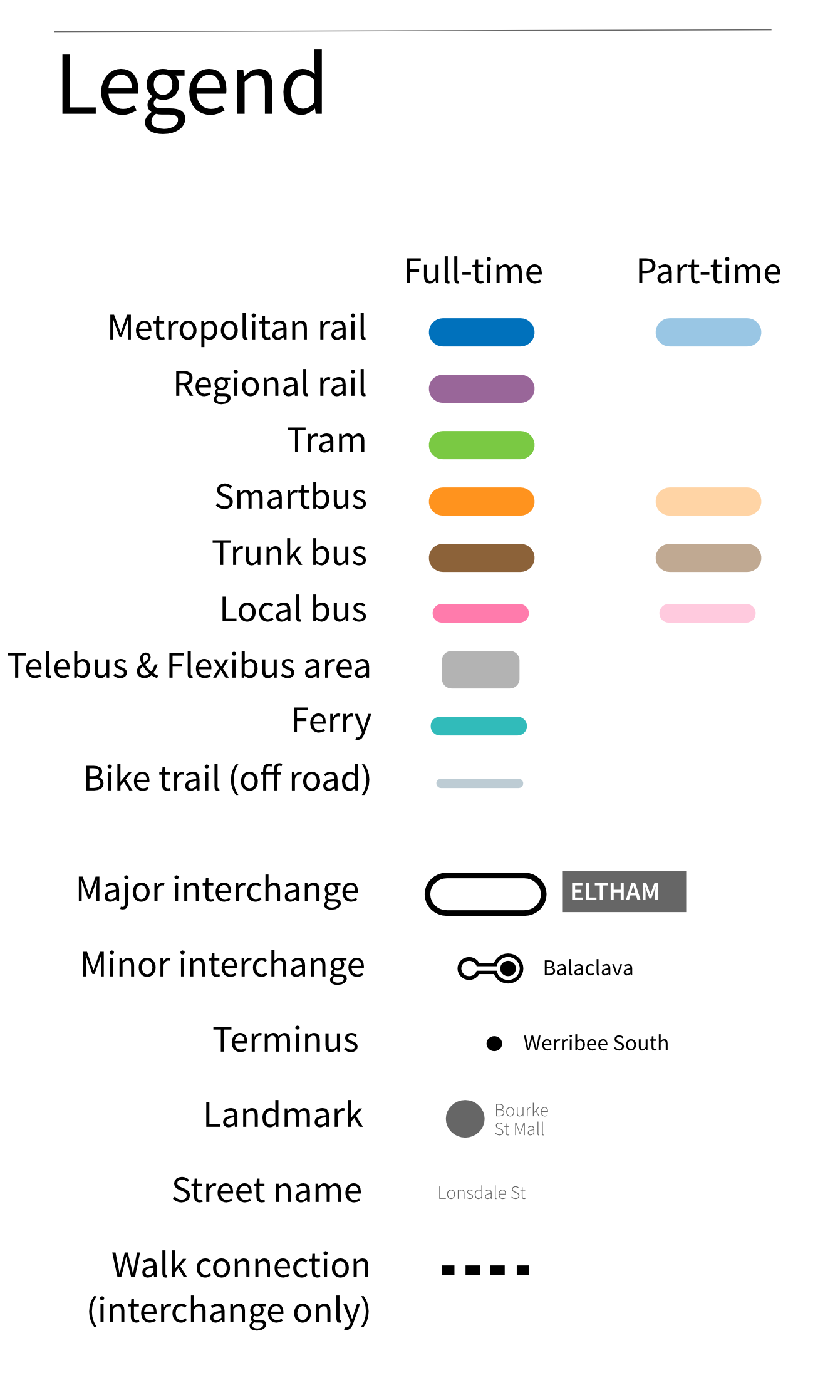 This is a comprehensive map showing all public transport routes in Greater Melbourne and Geelong including buses, trains and trams.

It is by far the largest and hardest map project that I've ever done.

All up, it took me 14 months and hundreds of hours to put together this project in the first place. I am also keeping this up to date regularly.

While PTV does publish local maps for particular areas showing all public transport modes, there is no publicly available equivalent to cover the whole city.

There are also several issues with the PTV local area maps that make them annoying to use for many purposes. These include:

This was a long and sometimes painful exercise. The sheer scale of the project meant that any task that might take a couple of hours on a smaller map ended up taking days or weeks to complete on this one.

Before I began, I spent a while thinking about how to organise the map and establish some design rules. In the end, there were quite a few that I tried to stick to as much as possible. But the most important rule for a map like this is to create a clear visual hierarchy.

What this means that is that a user can glance at a map from afar and at least vaguely see where the most important features of the map are located and how they relate to the rest of the elements.

In the case of this map, this consists of major interchanges and railway lines. These are the busiest and often the best-serviced parts of the public transport network, so it's important to highlight them above, say, the route 609 bus (which the PTV map visually treats equally with the Ringwood Line). This is done with line thickness, directness and colour palette.

The first parts of the map that I drew were the railways and CBD so that the rest of the map was built around these key anchors. Then it was areas with grid-like tram and bus routes. These were actually some of the hardest areas to design.

With meandering routes, there is a lot more flexibility to 'iron out' random curves or kinks and make them connect to the rest of the network more logically. A straight route, like the route 246 bus, is virtually impossible to take away from its straight north-south direction.

This freedom from strict geography means a lot of space can be saved and efficiences created. It also allows 'nudges' to be built into the design that aren't possible or are much hard with a geographic map. For example, the bus routes at Laverton Station are slightly offset to suggest to the viewer that they are not through routes.

Finally, there were some areas that took me weeks to design on their own, just because they were so confusing. Endeavour Hills, Middle Brighton, Highpoint and South Morang just about did my head in.

Given that routes change all the time, this map will require updates. However, I don't have the time to do this as it happens. There will probably be a time lag of at least a couple of weeks.

For the website itself, there is a roadmap for future improvements. Some of these include:

I should emphasise that this is a plan only, and I can't guarantee that all of these will be implemented soon, if at all. I want to take a break from this project for a while, as I have other maps to work on in the meantime. There may also be technological constraints that I'm not yet aware of.

If you do have any suggestions for other features or could help me get these implemented, please feel free to get in touch.

Thank you to Peter Parker who reviewed an early version of the map and helped me fix errors.

Also a huge thank you to everyone else who let me know about mistakes and suggestions for improvements. In no particular order (and apologies if I missed anyone):

Yes! While the map is copyright, it is freely available for anyone to use.

I work with a combination of Affinity Designer and QGIS. Early in my design process, I also use old-fashioned whiteboards, paper and pencils.

The route of a bus/tram/train/ferry/bike path doesn't actually look like that. Is it a mistake?

Why are there two or three termini with the same name (e.g. Williamstown)?

Early in my design process, I was planning to rename duplicate termini to alternative place names, especially where a railway station already exists.

However, I changed this while doing Stage 2 of the map design (placing terminus routes and names) to showing on the map what is displayed on vehicles and timetables. This is just to avoid confusion.

Why are there three categories of bus routes?

Including three categories of bus route was something that I thought about for a long time.

I decided to separate the three because of a change in the map that happened midway through its design. The map began as a frequency map - thicker lines would mean higher frequency of services. However, as I continued adding the hundreds of routes, it gradually dawned on me that this would take much longer than I expected.

As a result, I had to think about how to differentiate between buses that come only a few times per day and the high-frequenty buses that carry millions of people every year. As a compromise solution, I opted to include the three categories of bus route that you can now see on this map.

A Smartbus route (orange) are those designated as such by PTV.

A 'trunk' route (brown) on this map is a combination of two or more routes that combine to form a higher frequency along a common corridor. For simplicity, I've kept this designation for routes for which PTV publishes a combined timetable (e.g. the 200/207).

A 'local' route (pink) on this map is all other routes. A light pink colour is used to denote routes that operate only part-time or to show part-time route deviations.

Is there a map for the Night Network?

Yes! As of Version 1.3, there is now a separate map to show the Night Network train, tram and bus routes that operate on Fridays, Saturdays and selected public holidays between 1am and 6am.